His wife, Ruth, announced his death on Facebook.  "At 12:41 this afternoon, June 1, 2021, God opened the gates of the mansion He has so lovingly prepared for his dearly beloved son & faithful servant, Daniel C. Arichea Jr. From his birth on March 9, 1934, he has run the race, fought the good fight and kept the faith. His children, faith children, friends and kin, rejoice for the bells of heaven are ringing joyfully! He is now home! Thanks be to God!"

"Bishop Arichea was a mentor, a visionary and an encourager to many bishops, colleagues and laity.  He had a heart for mercy and justice and stood for what was right often when it was not popular," Bishop Harvey said.  "Bishop Arichea leaves a void in the Council of Bishops and in the greater United Methodist Church. He indeed fought the good fight and ran the race with perseverance and grace.  The only thing that could be added is, 'well done good and faithful servant, well done.'"

He served churches in Bataan and Manila before joining the faculty of Union Theological Seminary, teaching New Testament. He later joined the United Bible Societies as a translation consultant, and served in that capacity in the Philippines, Thailand and Vietnam, and Indonesia and Malaysia. In 1987 he moved to Hong Kong, SAR, P.R. of China to assume the office of Regional Transition Coordinator for the Asia-Pacific Region, a position which he held until his election to the Episcopacy (in absentia) in November 1994.

While serving as resident bishop of the Baguio Episcopal Area for 1994-2000, he also held the following positions: Vice-chair of the National Council of Churches in the Philippines (NCCP), 1995-1997; Chair, NCCP, 1997-1999; President and Chair, Philippine Bible Society (1997-1998), honorary translation adviser, United Bible Societies (1995 to present), and member, Roman Catholic-Methodist International Commission, 1996-2000.

Danny (as he was called by friends) is the author of four commentaries primarily written for translators: Galatians (with Eugene A. Nida), 1 Peter (with Eugene A. Nida), Jude and 2 Peter (with Howard A. Hatton), and the Pastoral Letters (with Howard A. Hatton). He has also written many articles on Bible translation, published most often in The Bible Translator.

He was married to Ruth Cabralda Mandac, and their marriage was blessed with three children, Miriam, Stephen, and Michael; grandchildren: Joshua Thomas, Arielle Marie,  Daniel Benjamin, Ansel, Evan, and Rizzi. 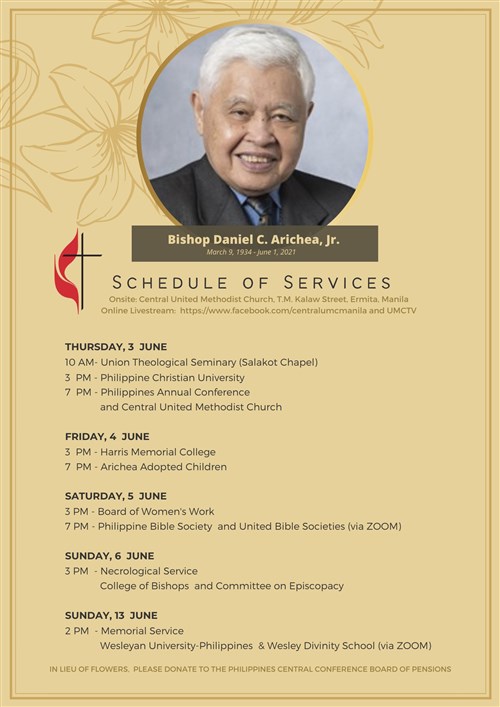