Bishop Beverly J. Shamana, a retired bishop of The United Methodist Church, has died.  She died on August 1, 2021 at her home in California at age 81. 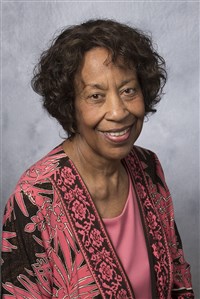 Council of Bishops President Bishop Cynthia Fierro Harvey described Bishop Shamana as a voice for justice and all that was right and true.

“Women bishops stand on the strength of her shoulders. Her commitment to the episcopacy and for women bishops was paramount. She was one who offered her constant love and support to all the bishops but particularly the women bishops who had accepted the responsibility to lead,” Bishop Harvey said. “Her presence will be missed.”

Bishop Tracy S. Malone, secretary of the Council of Bishops, noted that she has known Bishop Shamana for many years and always respected and appreciated her faithful leadership and her relentless commitment to address racial and social justice issues.  “She always encouraged and empowered us to be transformational leaders… to use our voice, position and power to be agents of change…to transform systems and structures and people’s lives. Bishop Shamana will be deeply missed,” Bishop Malone said.

Former Council of Bishops President Bishop Warner Brown was elected in the same jurisdiction with Bishop Shamana and said he was devastated by the news of Bishop Shamana’s death.  “Bishop Beverly Shamana is widely known as a gifted preacher, musician, artist and teacher. But I will remember her most as a cherished colleague who embodied a love and spirituality that embraced and lifted all the people she met.”

Born November 4, 1939, Bishop Shamana was a native of Los Angeles, California, and was raised with three younger siblings in Pasadena, California, by her parents Sylvester and Charlene Martin. It was in the Metropolitan Baptist church of her childhood that she was nurtured in the faith, baptized by immersion, and made a personal commitment to Christ. This decision was deepened when her family joined the Lincoln Avenue Methodist Church in the community during her adolescent years.

As a student of choral and piano performance in Pasadena schools, she pursued her love of music and earned a B.A. degree from Occidental College in Choral and Music Education in 1961. In Bishop Shamana's early career, she taught public school choral and music history in Compton and Pasadena School Districts while directing church choirs for ten years. The ministry of the Ecumenical Institute of Chicago was established in the Los Angeles area where she became a participant through her local church, Grace UMC. During this time, she established a retail/manufacturing knitting machine business in Pasadena.

While serving as the Executive Secretary for the Commission on the Status and Role of Women in the Pacific and Southwest Conference in the mid-seventies, she answered God’s call to ministry and entered Garret-Evangelical Theological Seminary, receiving her Master of Divinity Degree in 1980. She was ordained deacon in 1979 by Bishop Charles Golden and elder in 1984 by Bishop Jack Tuell in the California-Pacific Annual Conference.

She was a delegate to six General and Jurisdictional Conferences from 1976 to 2000. From 1980-89, she served multi-cultural churches in Los Angeles and Inglewood until her appointment to the Conference Council on Ministries as Associate Council Director.

She served eleven years in that position until she was elected to the episcopacy by the Western Jurisdiction in July 2000. Bishop Shamana was assigned to the San Francisco Area, where she served until she retired.

In 2002, Bishop Shamana traveled with the Council’s peace delegation to Pakistan and the Middle East. She made an Episcopal visit to the West Angola Annual Conference and Africa University in October 2004, and in 2006, she spent January teaching at Drew Seminary as the Bell Scholar as the Bishop in Residence.

Abingdon Press published her book, Seeing in the Dark, A Vision of Creativity and Spirituality, in 2001. Her book challenges the church to affirm the creative gifts as sacred pathways to a deeper companionship with God and a way to a more vital discipleship. She enjoyed playing the piano and other arts, writing, gardening, and preaching.

Bishop Shamana is survived by her husband, Walter Woods.

A Memorial Service has been tentatively arranged for Sept. 11, 10:00 a.m. at Pasadena First UMC.