Churches Uniting in Christ (CUIC), a covenant organization of eleven different US denominations/communions, held its triennial plenary session in Montgomery, Alabama from June 6-9, 2019. The plenary included up to seven delegates from each of the eleven members.

CUIC’s roots began in the 1960s as the Consultation on Church Union (COCU). In 2002, the eleven Christian denominations/communions pledged to live more closely together in expressing their unity in Christ and in combating racism. These church bodies are deepening their relationships and extending their common life to be a public witness of reconciling the baptized and seeking unity with justice.

This year’s plenary session began with tours of the Dexter Avenue King Memorial Baptist Church, the Legacy Museum and the Legacy Memorial founded by the Equal Justice Initiative to memorialize the 4,000 plus lynchings that have been documented.

The remainder of the session was devoted to visioning and planning for the next three years. Reports were given by the Racial and Social Justice Task Force and the Young Adult Task Force, the two primary foci of CUIC since it last met in St Louis in 2016. The two Task Forces have sponsored live forums and webinars addressing issues of racism, mass incarceration, and mental health. Videos and various statements from CUIC can be found on the website, www.ChurchesUnitingInChrist.org.

This plenary session established its foci for 2019-2022 as follows: 1) to continue and expand the work of the Young Adult Task Force to include a component to equip additional young adults as ecumenical leaders 2) to work with other organizations who promote grassroots activity to combat racism and 3) to envision a new structure or new entity that will provide continued opportunities for bilateral and multilateral agreements among the member denominations/communions. This work will be directed by the Coordinating Council, which includes three members from each member.

The following officers were newly elected* or re-elected for 2019-2022: 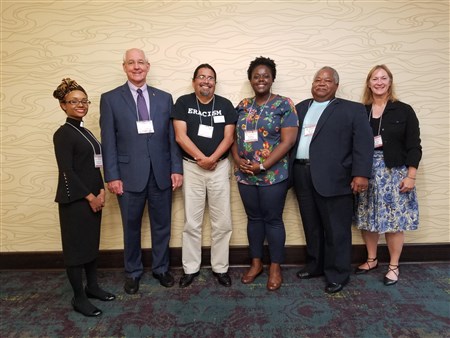