More than 60 representatives of The United Methodist Church (UMC)  attended the recently ended Eleventh Assembly of the World Council of Churches (WCC) held in Karlsruhe in Germany August 30 through September 9, 2022.

The World Council of Churches (WCC) is a fellowship of 352 communions (churches or denominations) from around the world who covenant together to reflect visible unity, to join each other in mission, and to offer a joint voice on issues of justice around the world.

Every eight years, the WCC gathers representatives from member churches in a global assembly which focuses on worship, Bible study, fellowship, hearing from each other, electing new officers and setting the agenda for the subsequent eight years.

Present at this Eleventh Assembly were 883 delegates and advisors, 1,184 participants and observers, 974 local volunteers and interpreters, 137 students and faculty for the Global Ecumenical Theological Institute (GETI) and 150 young adult stewards.  Additionally, there were eleven representatives of churches from Ukraine who were invited as special guests, so the global church could offer a tangible sign of support. Since the last assembly seven new churches have joined, including the Dutch Reformed Church, the Africa Brotherhood, the Apostolic Faith Mission of Southern Africa and others. 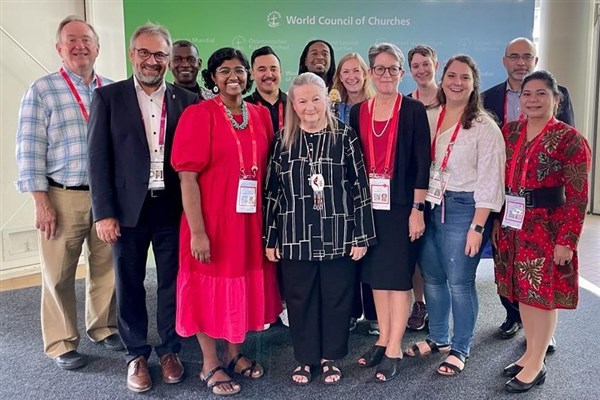 However, in addition to the voting delegation, United Methodists from around the Connection participated as presenters, participants and stewards.  There were also five young adults in the GETI program, including: Mr. Tavis Tinsley (Gammon Seminary), Mr. Felix Seuß (Germany), Rev. Almuth Zipf (Germany), Ms. Hannah Andres (South Dakota) and Ms. Ericka Jallah (Liberia and Bossey student).  These participants received training on the global Ecumenical Movement parallel to the assembly.

Two full days of pre-assembly gatherings were convened, including one for young people, one for indigenous people, one for differently-abled people, and one for women and men wanting to work together for gender justice.  Each group wrote a report with recommendations to be sent to the assembly for programmatic consideration between now and the next assembly. 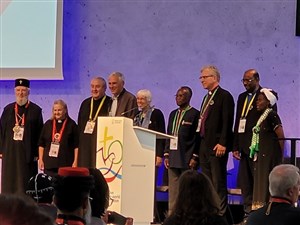 At the beginning of the assembly greetings and reports were offered.  Bishop Mary Ann Swenson, one of the two Vice-Moderators recalled the actions of the Central Committee over the previous nine years and reminded all present that “we are called both to act for justice and to deepen our relationships. Justice and unity,” she said, “are inseparable.”

Fr. Ioan Sauca, who served as the Interim General Secretary for the last few years, offered advice for the assembly moving forward stating, “The Ecumenical Movement means strengthening relationships.”  In reference to the war between Russia and Ukraine, he strongly stated, “We bring people to dialogue, we don’t expel people” noting the presence of both Russian Orthodox and invited Ukrainian representatives.  He also uplifted the WCC document on human sexuality and recommended all churches study it as a way to further dialogue.

Dr. Agnes Abuom, the Moderator, thanked the leadership and named the foci that had risen to the surface as: 1. Truth and justice, 2. Gender justice, 3. Anti-racism, 4. Hurt and trauma, and 5. Health and healing.  She clearly said, “In Christ’s Love lies the key to our unity.”  The assembly was also greeted by German government officials, including the President of the German Federation, Frank-Walter Steinmeier.  He forcefully stated that he expected the WCC to tell the Russian Orthodox Church leaders present that they are helping to perpetuate killing and injustice, and that they should go home and work to make it stop.

Each day the assembly received greetings from global religions leaders.  Some of them included the following:
Each day of the assembly had a theme, Including: climate crisis, racism and xenophobia, the war in the Ukraine, Middle East peace, global health pandemic and violence against women and children.  Drama, the Pacific tradition of “talanoa,” Scripture reading, wheelchair ballet, panel discussions, speakers and video were used to help the assembly understand the issues involved in each of the themes.

A “Networking Zone” was always available, and it provided the venue for several smaller workshops on various topics.  For example, the WCC Faith and Order Commission offered a presentation on their newly produced consensus document entitled Facilitating Dialogue to Build Koinonia. The commission reported they listened deeply and came up with a way to facilitate deep dialogue, noting that the basis of dialogue is mutual recognition of some element of Christ in each dialogue partner.

There were also a couple Methodist Family gatherings held in the local Methodist Church.  The first one was a time to introduce the many gathered to the World Methodist Council.  Bishop Ivan Abrahams welcomed Methodists from every global region and spoke about the WMC.  We returned on Sunday for morning worship, at which time Bishop Abrahams preached and Bishop Rückert offered the Communion liturgy.  That evening there was a reception for all Methodist/Wesleyan/Uniting participants.

Of course, there was also business conducted at the assembly, particularly during the final four days. The following people were named as the Presidents of the WCC: Most Rev. Dr. Rufus Okiliola Ositelu from Africa, Rev. Dr. Henriete Hutabarat-Legang from Asia, Rt. Rev. Philip Wright from the Caribbean and Latin America, Rev. Dr. Susan Durber from Europe, Rev. Dr. Angelique Walker-Smith from North America, Rev. Francois Phiaatae from the Pacific, H.E. Metropolitan Dr. Vasilios of Canstantia- Ammochostos from the Eastern Orthodox Church, and H.H. Catholicos Aram I of the Oriental Orthodox Church.

The UMC will have two representatives on the Central Committee: Bishop Sally Dyck (who will also serve on the Executive Committee) and Rev. Ann Jacob.

The finance report was received and approved.  Many programmatic suggestions were made for the Central Committee to discern, including adding a desk for youth to the WCC staff, forming a Health and Healing Commission, making a clear united response to the climate crisis and creating a library of resources.  Additionally, several statements were made, including one on the war in Ukraine, one on peace in the Middle East, one on the Armenians being held captive, one on peace on the Korean Peninsula, and one on the situation in West Papua.

A unity statement of the assembly called member churches to work together in unity, through an “ecumenism 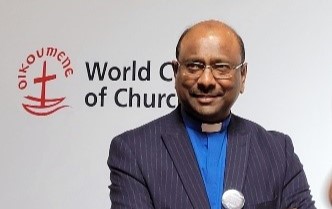 of the heart, and to bring Love into the public sphere.  A message statement from the assembly, entitled “A Call to Act Together,” was also offered, which offers a summary of the issues discussed.

The new General Secretary, Professor Dr. Jerry Pillay of South Africa will assume his position January 1, 2023. He affirmed the WCC mission, and the pilgrimage of justice and peace pivoting to the pilgrimage of reconciliation and unity.  He also shared what his foci would be for his term in leadership.

There were several take-aways from the global assembly.  I will conclude here with three:  The eleventh assembly of the World Council of Churches is now concluded.  The newly named Central Committee met together to begin their work.  They will gather again in June of 2023 to set program for the next eight years, and The United Methodist Church will continue to be a vital part of that work.  God has blessed this fellowship of communions, and the results of that blessing will continue to be realized around God’s Creation.  Thanks be to God. 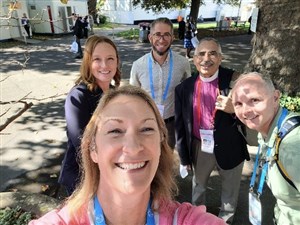