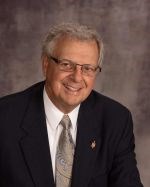 He was admitted on trial in the former Missouri Conference, and was admitted to full connection in the Missouri West Conference. He was ordained deacon and an elder by Bishop Eugene Frank.

Fritz served in a variety of appointments in Missouri and Indiana. He was Pastor of the Union-Star Chapel-Oak Grove circuit for two years after graduating from seminary. Moving from there to Savannah he became the founding Pastor of Crossroads Ecumenical Cooperative Parish. For eight years he was a member of the Missouri West Conference staff serving as Director of Education and Camping and as Conference Council Director. In 1982 he was appointed Senior Pastor of First United Methodist Church, Blue Springs. Bishop W.T. Handy, Jr., appointed him to the Central District in 1987 and to the Kansas City North District in 1989. During these years he was a delegate to five Jurisdictional Conferences and four General Conferences. He led the General Conference delegation in 1984, 1988 and 1992. He served as a director of the General Board of Discipleship (1980-1988), the General Board of Global Ministries (1988-1992), and the General Commission on Christian Unity and Interreligious Concerns (1996- 2004). He served as Chairperson of the General Task Force on Concern for Workers (1996-2000), and President of the General Commission on Christian Unity and Interreligious Concerns (2000- 2004). In retirement, he serves as a member of the coordinating Council of Churches Uniting in Christ. He and Etta Mae serve as Coordinators of the United Methodist Global AIDS Fund.

Fritz Mutti was elected to the episcopacy by the South Central Jurisdictional Conference in 1992 and assigned to the Kansas Area where he served until his retirement in 2004.

He is married to Etta Mae McClurg Mutti and were parents of three sons. Etta Mae and Fritz are the authors of a book, Dancing in A Wheelchair.