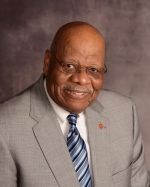 Alfred L. Norris, Sr. was born in Bogalusa, Louisiana. He is a child of the church, the first son of Mrs. Adele Washington Norris and the late Reverend L.H.P. Norris. Educated in the public schools of Louisiana, he received his high school diploma from the Southern University Laboratory School, Baton Rouge. He furthered his formal education at Dillard University in New Orleans, obtaining a B.A. degree. He completed his seminary education at Gammon Theological Seminary, Atlanta, Georgia, with an M.Div. degree, and was later honored with a D.D. degree. Several other institutions have bestowed honorary degrees upon him.

Norris was ordained deacon and then elder by Bishop Noah Moore. In the Louisiana Annual Conference, he has served as pastor of the following churches: Haven; Peck; First Street and Mount Zion. From 1968-1972 he was Director of Recruitment for Gammon Theological Seminary. He was District Superintendent of the New Orleans/Houma District of the Louisiana Annual Conference from 1974-1880, and he served as President of Gammon Theological Seminary of the Interdenominational Theological Center in Atlanta from 1985-1992.

Norris participated in a Preaching Mission to Latin America in September 1967, was Guest Preacher for "Bishop's Week" at Mount Sequoyah, Fayetteville, Arkansas, in June of 1980, and served as Guest Preacher for the Liberia Annual Conference in February, 1988. He has been the guest preacher or lecturer at numerous other conferences, seminars, church services and religious activities nationwide.

Norris was a delegate to the General Conferences of 1976, 1984, 1988 and 1992 and was elected to lead the Louisiana Conference Delegation in 1992. He was a delegate to the World Methodist Conference each quinquennium since 1976. While in Louisiana, he served as Chairman of the Board of Ordained Ministry from 1980-1988. Additionally, he served on the Board of Publications of the United Methodist Church and was a member of the Association of United Methodist Theological Schools.

Alfred Norris was elected to the episcopacy by the South Central Jurisdictional Conference in 1992 and was assigned to the Northwest Texas/New Mexico Area, with headquarters in Albuquerque, New Mexico. At the 2000 Jurisdictional Conference, he was assigned to the Houston Area. From 1996 until 2004, he was a member of GCFA, serving as President from 2000-2004. He retired in 2004 and returned to Gammon Theological Seminary to serve as Bishop-in-Residence.