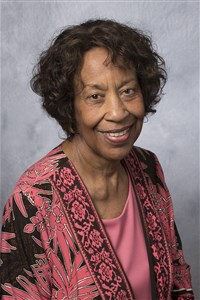 Bishop Beverly J. Shamana was a retired Bishop of The United Methodist Church. She was elected and consecrated to the episcopacy in 2000 in the Western Jurisdiction, where she served until her retirement in 2008. Bishop Shamana passed on July 31, 2021.

Beverly J. Shamana was a native of Los Angeles, California, and was raised with three younger siblings in Pasadena, CA, by her parents Sylvester and Charlene Martin. It was in the Metropolitan Baptist Church of her childhood that she was nurtured in the faith, baptized by immersion, and made a personal commitment to Christ. This decision was deepened when her family joined the Lincoln Avenue Methodist Church in the community during her adolescent years.

As a student of choral and piano performance in Pasadena schools, she pursued her love of music and earned a B.A. degree from Occidental College in Choral and Music Education in 1961. In Beverly’s early career she taught public school choral and music history in Compton and Pasadena School Districts while directing church choirs for ten years. The ministry of the Ecumenical Institute of Chicago was established in the Los Angeles area where she became a participant through her local church, Grace UMC. During this time she established a retail/manufacturing knitting machine business in Pasadena.

While serving as the Executive Secretary for the Commission on the Status and Role of Women in the Pacific and Southwest Conference in the mid-seventies, she answered God’s call to ministry and entered Garret-Evangelical Theological Seminary, receiving her Master of Divinity Degree in 1980. She was ordained deacon in 1979 by Bishop Charles Golden and elder in 1984 by Bishop Jack Tuell in the California-Pacific Annual Conference.

From 1980-89, Beverly served multi-cultural churches in Los Angeles and Inglewood, CA, until her appointment to the Conference Council on Ministries as Associate Council Director for eleven years until she was elected to the episcopacy by the Western Jurisdiction in July 2000 with an assignment to the San Francisco Area. She served two quadrennia each as an officer on the General Commission on the Status and Role of Women (1976-1984) and the General Board of Publication (1988-1996). She was a delegate to six General and Jurisdictional Conferences from 1976 to 2000. She served as President of the General Board of Church and Society and was a member of the Connectional Table.

In 2002, Beverly traveled with the Council’s peace delegation to Pakistan and the Middle East. She made an Episcopal visit to the West Angola Annual Conference and Africa University in October 2004, and in 2006, she spent January teaching at Drew Seminary as the Bell Scholar as the Bishop in Residence.

Abingdon Press published her book, Seeing In the Dark, A Vision of Creativity and Spirituality, in 2001. Her book challenges the church to affirm the creative gifts as sacred pathways to a deeper companionship with God and a way to a more vital discipleship. Bishop Shamana continued to teach and create gourd art in response to Christ’s call to active stewardship using all that we have been given. She enjoyed playing the piano and other arts, writing, gardening, and preaching.