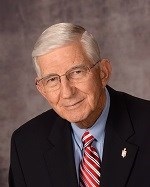 He was born in Matador, Texas, in the heart of Texas ranch country on December 15, 1936. His parents were lifelong Methodists, as were his ancestors. Lazarus Solomon, an Irish Jew, came to America and later served with George Washington. His son, John, was converted to Christianity by a Methodist Circuit Rider. John's firstborn, John Wesley Solomon, became the first Methodist preacher in a subsequent line of nine Methodist preachers.

Solomon has chaired several General Conference legislative committees, as well as numerous Annual Conference boards and agencies. An author and lecturer, Solomon has been and continues to be active in civic and community work.

He was elected to the episcopacy in 1988 by the South Central Jurisdictional Conference and assigned to the Oklahoma Area. In 1996, he was assigned to the Louisiana Area. In the 1996 quadrennium, he chaired the General Board of Global Ministries.

After retiring in 2000, Solomon served as the Bishop in Residence at McMurry University.  He also served as President of the Texas United Methodist College Association.