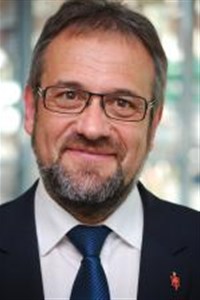 Bishop Rückert was born in 1958 in Nuremberg where he grew up. After passing his university entrance examinations, he studied Food Technology at the TUM School of Life Sciences Weihenstephan in Munich, before finding his way to the pastoral ministry of the United Methodist Church.

After a twelve-month internship with the South Germany Annual Conference in Munich-Enhuberstrasse (now the Erlöserkirche), he studied Theology from 1980 to 1984 at the UMC Theological Seminary in Reutlingen (now Reutlingen School of Theology). Harald Rückert gained his first experience as a pastor in local church ministry for the UMC from 1984 to 1988 in the Hof-Stammbach circuit, in north eastern Bavaria. He was also ordained during this period (1986). From 1988 onwards, he worked for 12 years as leading pastor in the Schweinfurt-Würzburg circuit in north Bavaria, followed by ten years as Superintendent with responsibility for the Reutlingen District. From 2010 to 2017 he was leading pastor in the Erlöserkirche circuit in Reutlingen.

Since starting his pastoral work in the Hof-Stammbach circuit, where he was responsible for launching the church congregation in Stammbach, Rückert has looked in depth at issues of establishing churches, church leadership and development management. Advanced training courses on the management of social organisations and time management together with staff leadership and mentoring have qualified him to play a major role in developing and running the Church Leadership course. This course model provides probationary pastors in local church ministry with intensive mentoring during their second phase of training after completing their theology degrees. While Superintendent for the Reutlingen District, he also chaired the Committee for New Mission (later: church planting group) for church planting projects and activities involved in establishing new churches, also playing a major role in setting up and organising the Youth Church Karlsruhe.

Besides his work in local church ministry and special ministry, Harald Rückert was also involved in assignments and auxiliary activities in many areas of the UMC and also going over and beyond the UMC:

Since 1992  Member of the Germany Central Conference
Since 1991 Delivering training courses for full-time ministers on church leadership and selfmanagement/burn-out prevention
2006-2010 Setting up and organising the Youth Church Karlsruhe as Chair of the Youth Church Group 2001-2010 Chair of the Committee for for New Mission (later: church planting group)
1991-1997 Developing and delivering the Church Leadership course for probationary pastors

Since 2016  Free-church representative for the National ACK on the steering committee for the »Do You Know Who I am?« project (National ACK, Central Council of Jews in Germany and four national Moslem associations)

Harald Rückert is married; he and his wife have three grown-up children.