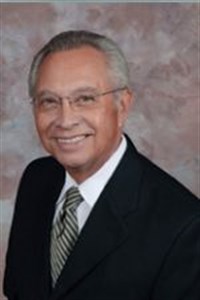 Bishop Elias Galvan is a retired bishop of The United Methodist Church, having served from 1984-2004.

Bishop Elias Galvan was born on April 9, 1938, into a Methodist parsonage in San Juan Acozac, Puebla, Mexico. His father, the Rev. Elias Galvan Ortiz, was born in Oaxaca Mexico into a Roman Catholic home but became a Methodist during his education at the Instituto Mexicano Madero a Methodist School in Puebla Mexico. Reverend Galvan Ortiz graduated from the United Seminary in Mexico City and was ordained Elder in the Methodist Church of Mexico. Bishop Galvan’s mother received her formal education at the Instituto Sara Alarcon, a Methodist school in Mexico City.

Education: Bishop Galvan received his High School education at the Methodist Boarding School “Instituto Mexicano Madero” in Puebla Mexico. While attending Highschool the District Superintendent assigned him to serve as lay pastor to a circuit that included two congregations in the towns of Tecali and San Pablo Actipan, near Puebla city, and later to another rural circuit comprised of the congregations of San Pedro del Rincon and El Carrisal near Mexico City.

In 1956 he came to the US on a student visa sponsored by the Spanish American Institute, a Methodist institution located in Gardena California, and obtained an A.A. degree from Compton Junior College and a B.A, degree from California State University in Long Beach. The School Theology at Claremont provided his seminary education where he obtained a Doctor of Religion (Rel. D.)

He became a Probationary member of the Southern California-Arizona Annual Conference and was ordained Deacon and later Elder by Bishop Gerald Kennedy and received into full membership in 1969. He served the following appointments: Asbury United Methodist Church as Associate Pastor, City Terrace UMC, All Nations UMC in Los Angeles, Director of the Ethnic Planning and Strategy Department of the Conference Board of Missions; District superintendent of the Santa Barbara District becoming the first Hispanic/Latino DS in an Anglo Conference in the US. He served two years as Dean of the Cabinet under Bishop Charles Golden; in 1980 he was appointed as the Conference Council Director, the first Hispanic/Latino to serve as Director of Connectional Ministries in any of the Anglo Conferences in the US.

During his ministry at City Terrace, he became actively involved in the Mexican American Civil rights Movement in East Los Angeles on behalf of equal education opportunities for the Hispanic youth and in support of the Farm Workers Union.

In January of 1970 he was selected to chair the committee that organized MARCHA (Methodist Associated Representing the Cause of Hispanic American’s) and made a presentation to the 1970 Special Session of General Conference on Hispanic/Latino Ministries. During 1983 and 1984 he served as President of the Southern California Ecumenical Council.

In 1984 he was elected to the Episcopacy by The Western Jurisdiction meeting at Boise Idaho and assigned to the newly created Phoenix Episcopal Area and charged with the responsibility of organizing a new Annual Conference now known as the Desert Southwest Annual Conference, where he served for 12 years (1984-1996). In 1996 he was assigned to preside over the Pacific Northwest Annual Conference. He received the following assignments from the Council of Bishops: The General Council on Ministries, (1984-88); The General Board of Discipleship where he chaired the Division of the Upper Room (1989-92); The General Board of Global Ministries (1992-2000) where he Chaired UMCOR; The Commission of Religion and Race where he was elected by the Board of Directors as President during the 2000- 2004 quadrennium.

During his active membership in the Council of Bishops he was appointed by the Council to chair the Committee to Develop the National Plan for Hispanic Ministries (1989- 1992) approved by the 1988 General Conference; elected as Chair of the Council of Bishops Program “Hope for the Children of Africa”; and chaired the COB Committee on The Autonomous Methodist Churches whose primary task was strengthening the relationships of the UMC with Autonomous Methodist churches in other parts of the world through the establishing of Covenanting Relationships and presented to General Conference for final approval.

In 2002-2003 Bishop Galvan was elected as President of the Council of Bishops. As President, the Council of Bishops asked him to accompany Bishop Alfred Ndoricimpa in his return from exile in Nairobi, Kenya to his Episcopal Area in Bujumbura, Burundi. Also, he led the Peace delegation to the Middle East meeting with Church Leaders and Government Officials in Pakistan, Israel, and Palestine.

Bishop Galvan retired officially in 2004 but a year before, he was asked by the Council of Bishops and the GBGM to serve as the Supervising Bishop of the newly created United Methodist Mission in Honduras. Bishop Galvan continued in this assignment until 2019.

On July 12, 1986, he married Zoraida Freytes, who was raised in a Methodist parsonage on the island of Puerto Rico. On September 20, 1988, they were blessed with the birth of a child Elias Gabriel.