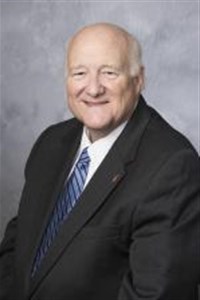 Prior to his retirement, Bishop Lowry was the resident bishop of the Central Texas Conference of The United Methodist Church/Fort Worth Episcopal Area, where he was the spiritual leader for approximately 154,000 United Methodists in 320-plus congregations and developing new faith communities.

At the time of his election and consecration as bishop in July 2008, he was serving as executive director of New Church Development and Transformation in the Southwest Texas Conference in San Antonio, Texas. Prior to that, he was senior pastor at University United Methodist Church in San Antonio, which grew from 4,800 to 5,700 members during his tenure. His previous appointments include United Methodist Churches in Austin, Corpus Christi, Harlingen and Kerrville and, while a student, serving Plymouth Park in Irving, Texas. Mike began his ministry with the Society of Friends (Quakers) sharing in pastoral leadership for Rich Square Friends Meeting.

Bishop Lowry was awarded the B’nai B’rith Award in Social Ethics by Perkins School of Theology (1976) and the Harry Denman Evangelism Award from the Central Texas Conference-Foundation for Evangelism (2015).  Churches under his leadership have received numerous awards and recognitions, including the Habitat for Humanity Award (2004), the President’s Award from Huston-Tillotson University (2004), the Churchmanship Award from the San Antonio Community of Churches (2003), and the Moore Award Evangelism Award three times.

Bishop Lowry is a regular blogger at “This Focused Center” http://www.bishopmikelowry.com/.  Other publications include: