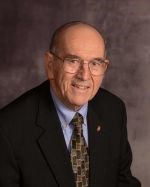 J. Woodrow Hearn was a retired bishop in The United Methodist Church.

He was born in McIntyre, Louisiana. After receiving an A.B. degree from Louisiana Tech University, he attended Boston University School of Theology from which he earned an M.S.T. and a Th. D. in Social Ethics. He also did graduate studies in New Testament at Harvard Divinity School.

Anne Connaughton and Woodrow Hearn were married on August 24, 1952.

They had four children: Mark, Paul, Diana, and Bruce.