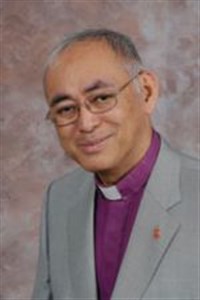 He grew up in a parsonage, his father being a Methodist minister. When he was still a small boy, his father accepted the challenge of being assigned as one of the pastors in Mindanao, in the Southern Philippines, which was at that time, in terms of mission work, still considered a frontier area. His father, being a frontier pastor, could not send Leo to school, so Leo went to live with his grand aunt who supported his going to school from high school until he finished college. He entered the ministry, got married and finished seminary training at Union Theological Seminary, where he graduated cum laude and president of his class.

After being assigned to several local churches, and with four toddlers, he entered a college of medicine to pursue his medical studies. He graduated from the College of Medicine, took his internship, and after passing the medical board exam opted to serve the poor and less privileged in the mountains and rural areas of war-torn Mindanao. After briefly serving as District Superintendent, he was assigned Person-in-Mission in Health Ministries of the Davao Episcopal Area. He also directed the mobile medical-dental clinic. He traveled to the villages in the mountains and depressed areas with his staff by horseback, motorcycle, walking, pump boat, paddle canoe, and carts pulled by caribou.

He was assigned as administrative assistant to Bishop Paul Locke Granadosin the year before he was elected to the episcopacy in 2000. Re-elected for a second term in 2004, he was assigned to serve the Davao Episcopal Area (2001-2004 and 2005-2012).

Bishop Soriano's wife, Dania Aben Soriano, passed on November 1, 2021. They were the parents of four children who are all grown up now: Hesed, a social worker; Nezer; a medical doctor; and twin brothers Omar (studying law) and Ronald (studying dentistry).