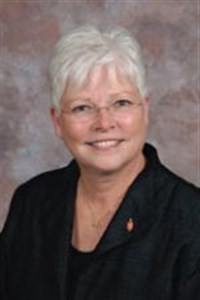 Bishop Mary Virginia Taylor is a Retired Bishop in The United Methodist Church. She was elected to the episcopacy in 2004 by the Southeastern Jurisdiction and retired in 2021, where she was the Resident Bishop for the Holston Conference.
------------------------

Called Dindy by her friends and family, she was born in Washington, DC. She moved on her fifth birthday to Atlanta, Georgia, and at nine she joined the church on profession of faith, making Decatur First United Methodist Church her church home.

After earning her Bachelor's Degree from the University of Georgia, Dindy completed her Master of Divinity degree at Candler School of Theology, Emory University. It was at Candler that she met Rusty Taylor. They were married in June of 1973 and began serving as a clergy couple. They were ordained deacons in 1974 and elders in 1976.

Dindy served for 30 years as a member of the Holston Conference. It was in her fifth year as Cleveland District Superintendent that she was elected to the episcopacy in July, 2004, by the Southeastern Jurisdictional Conference. On September 1, 2004, she became the first woman to serve as Resident Bishop of the Columbia Area (South Carolina Annual Conference) in the United Methodist Church. After serving the Columbia Area for 8 years, she was assigned to the Holston Area in 2012. She retired in 2021.

The Taylors are parents to two daughters: Mandy, who is married to Kyle Young, and Tiffany.