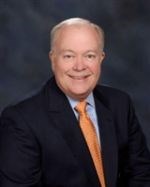 Bishop Michael McKee was elected to the episcopacy in 2012 and is the current Resident Bishop of the Dallas Area, which includes the North Texas Conference in the South Central Jurisdiction of The United Methodist Church.
------------------------

Bishop McKee is a native of Fort Worth, Texas. He earned a Bachelor of Arts degree from the University of Texas at Austin (1973), a Master of Theology from Perkins School of Theology of Southern Methodist University (1978) and was awarded an honorary Doctor of Divinity degree from Texas Wesleyan University (2005). He also was honored with the Perkins Distinguished Alumnus Award in 2017.

He was ordained deacon in 1975 and ordained elder in 1979 in the Central Texas Annual Conference, where he served several churches, including 15 years as the senior pastor of First UMC, Hurst.

In 2012, McKee was elected to the episcopacy by the South Central Jurisdictional Conference and assigned to serve as the resident bishop of the Dallas Area effective September 1.

Mike and Joan (Craig) McKee have been married since 1975 and have two children: Erin, who lives with her husband, Darin, and sons, Knox and Ford, in California; and Meredith, who lives in Dallas.