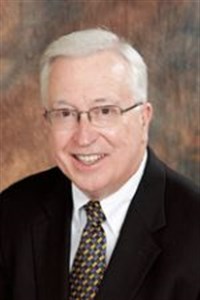 Neil L. Irons, born in Elkins, West Virginia, is a graduate of Davis and Elkins College. While in school, he served the Belington Circuit of the Evangelical United Brethren Church in West Virginia. After receiving an M. Div. from United Theological Seminary, he was ordained by Bishop J. Gordon Howard and appointed to First Church in Huntington, West Virginia.

Neil then began matriculating at Vanderbilt University with a major in Biblical Studies, especially the Old Testament, and a minor in History of Religions. He earned both the M.A. and Ph.D. degrees. During this period he served the Epworth Church in the Tennessee Conference. He was an assistant professor at the University of Illinois at Urbana for three years and then transferred to the West Virginia Annual Conference where he was pastor of the Chapel Hill Church in Buckhannon, as well as a part-time assistant professor at West Virginia Wesleyan College. He was later appointed asthe Romney District Superintendent. He was elected to the episcopacy in 1984 by the Northeastern Jurisdictional Conference. He has been awarded honorary degrees by Davis and Elkins College, Centenary College (NJ), West Virginia Wesleyan College, Albright College, and Shenandoah University. In 1999 he was honored as Davis and Elkins College's alumnus of the year. In 2002 he was honored as United Seminary's distinguished alumnus.

Neil was the preacher at baccalaureate services at Davis and Elkins, West Virginia Wesleyan, Lycoming, Albright, and Centenary Colleges, and Shenandoah University: opening convocation speaker for LaGrange College and Drew University School of Theology; speaker at the inauguration of the president of United Theological Seminary. Currently, he is on the Board of Trustees of Lycoming College.

From 1996-2001 Neil was president of the North American Section of the World Methodist Council. He was a member of the WMC presidium, serving until 2006. In 1995, Neil represented the American religious community at the Service of Reconciliation in St. Paul's Cathedral, London, England commemorating the end of WWII. He was also one of five international religious representatives to attend the state dinner sponsored by Queen Elizabeth II on the previous evening for visiting international heads of state and the British representatives. In 2000 he was one of the World Methodist Council's officers to go to South Africa to present the World Methodist Council Peace Award to Nelson Mandela. In 2004 he was selected to become a member of the Order of Jerusalem, WMC.

Bishop Irons has served on the General Commission on Archives and History as president; on the General Board of Higher Education and Ministry; the University Senate; General Commission on Theological Education as chairperson; member of the planning team of IAMSCU (International Association of Methodist Schools, Colleges and Universities). In Pennsylvania, he serves as the chairperson of the Future Action Team and is a member of the governing board of the Pennsylvania Council of Churches.

Neil retired in September 2004 after serving as resident bishop for the New Jersey Area (1984-1996) and for the Harrisburg Area (1996-2004). In 2009, he began serving as the Executive Secretary of the Council of Bishops, with his office in Washington, DC. Personal interests are pipe organ, piano, and hiking. He has been published as a writer of articles for magazines and books.

His wife, Inez, died in 1993, and they have two children, Andrew and Anne. In 2002, he married Susan Thomas. Susan has two children, Jim and Elizabeth. Susan and Neil make their home in Mechanicsburg, PA.