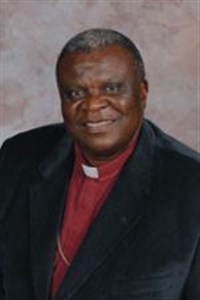 He was born at Kailo in then Zaire. His father is deceased, but his mother Kahole Julienne is still alive. He has been a Christian since childhood.

Ntambo finished his six years of elementary school in Kabongo. He went to secondary school in Lubumbashi for six years. Then he went to seminary for four years in Mulungwishi. He has a Master of Divinity degree from Nairobi International School of Theology in Nairobi, Kenya.

Bishop Ntambo worked as Assistant Legal Representative of North Shaba for sixteen years (1977-1993). He occupied the following positions: Executive Committee Vice-President; Secretary for Swahili-speaking people at the North Shaba Annual Conference; General Board of Global Ministries director; interpreter at the 1992 General Conference in Louisville; chairperson of the North Shaba Aviation Committee, Construction Committee, Ordained Ministry Committee; IPIM in the country of Burundi (1993-on as D.S., Supervisor and spiritual coordinator for refugees). This year he was the North Shaba delegation leader for the Central Conference at Wembo-Nyama.

Bishop Ntambo planted about 157 churches in the region of Bukuma and Lubudi. He opened two congregations in Nairobi. During his ministry he visited the following countries in order to fulfill his tasks: Zimbabwe, Kenya, Uganda, Tanzania, Somalia, Senegal, Zambia, U.S.A., Israel, Angola, Gambia, and South Africa.

He was elected to the episcopacy in 1996 and serves the North Katanga Area, Democratic Republic of Congo until his retirement.

He was married to Nshimba Nkulu, who passed on June 29, 2022. From that union, they had eight children (three boys and five girls).