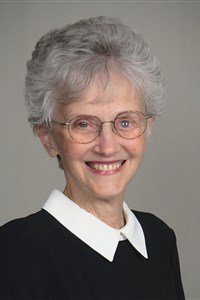 Bishop Peggy Johnson is a retired bishop in The United Methodist Church. She was elected to the episcopacy in 2008  by the Northeastern Jurisdiction and retired in 2021, where she was serving the Philadelphia Area, which included Eastern Pennsylvania and Peninsula-Delaware Conferences.

Peggy was baptized and grew up in the Methodist Church in Baltimore, Maryland. She pursued a degree in Music Education at Lebanon Valley, a United Methodist-related college in Eastern Pennsylvania. She taught elementary vocal music in Baltimore County Public Schools for two years. During this time, she felt a call to ministry, specifically with deaf people and people with disabilities. She left teaching and began to pursue a Master of Divinity degree at Asbury Theological Seminary. Peggy met her husband, Michael C. Johnson, at the seminary and they graduated together.

Upon graduation, they were offered appointments in the Baltimore Annual Conference.

Peggy was ordained Deacon by Bishop James K. Mathews and elder by Bishop D. Frederick Wertz. In her early ministry, she served a four-point country charge in Frederick MD, as a campus minister for Gallaudet University (a leader in higher education for deaf persons located in Washington, DC), and as co-pastor, with her husband, Mike, of Lansdowne United Methodist Church, in Baltimore, MD. In 1988 she was appointed to pastor the historic Christ UMC of the Deaf in Baltimore, where she served for 20 years. She earned her Doctor of Ministry degree from Wesley Theological Seminary and taught deaf and disability courses as adjunct faculty at the seminary.

The Rev. Peggy A. Johnson was elected a bishop of The United Methodist Church by the Northeastern Jurisdictional Conference in 2008, and was assigned to the Philadelphia Area, comprised of nearly 1,000 churches of Eastern Pennsylvania and Peninsula-Delaware Annual Conferences.

The Johnsons have two adult sons: Peter and Gabriel.