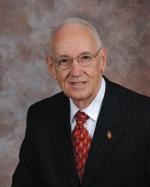 He was born in Ashland, Kentucky, and spent his childhood in Brooksville, Florida. He received a B.S. in Business Administration from Florida Southern College, M. Div. and Doctorate of Sacred Theology from Candler School of Theology, Emory University. His doctoral project dealt with the local ministers' professional relationships to other helping professions. He received honorary doctorates from Florida Southern, Birmingham Southern and Huntingdon Colleges.

Before going onto the ministry, Bob Fannin was part of the J.C. Penny management training program, served in the U.S. Army, and became a representative for the Burroughs Computer Corporation.

Bob Fannin was elected to the episcopacy from the Southeastern Jurisdiction in 1992, and served the Birmingham Area until his retirement in 2004.

Bishop Fannin has participated on the faculties of Schools of Christian Mission around the Southeastern United States for many years. He has his wife, Faye, have three children: Stephanie, Allison and Robb, eight grandchildren and three great-grandchildren.