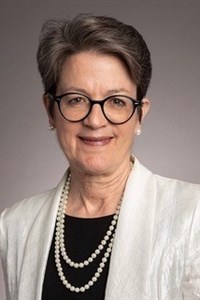 Bishop Sally Dyck currently serves as the Ecumenical Officer of the Council of Bishops. She previously served as the Resident Bishop of the Chicago Area, which included the Northern Illinois Conference in the North Central Jurisdiction of The United Methodist Church.

She was born in Ritzville, Washington. She was born into a Mennonite family and joined the United Methodist Church as a young adult.

She graduated from Boston University College of Liberal Arts with a Bachelor of Arts degree in political science and from Boston University School of Theology. She received a certificate from the Ecumenical Institute which is a joint program of the World Council of Churches and the University of Geneva, Switzerland. She was ordained in the East Ohio Annual Conference. She also received a Doctor of Ministry from United Theological School, Dayton, OH, in Black Church Studies as a Bishop James S. Thomas fellow.

Sally served as a director of the Board of Global Ministries (1999-2004), chairing the Personnel Committee. She was a jurisdictional delegate six times and a General Conference delegate four times. In February 2006 she was elected to the Central Committee of the World Council of Churches.

Sally was elected to the episcopacy in Davenport, Iowa, in 2004 and assigned to the Minnesota Annual Conference. After serving 8 years in the Minnesota area, she was assigned to the Northern Illinois Conference in July 2012. She seeks to be the bishop to the nones (those persons who check "none" when asked their religious preference). She begins her day with prayer, Bible study, and a 3-6 mile run through the cathedral of nature.