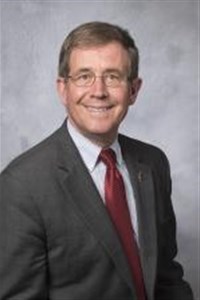 Bishop Scott Jameson Jones was elected to the episcopacy in 2004 and currently serves as the resident bishop of the Texas Annual Conference of The United Methodist Church with an office in Houston.
------------------------

Bishop Jones was born in 1954 in Nashville, Tennessee, and was raised in Tennessee, Illinois, Indiana, and Colorado.  He received degrees from the University of Kansas (B.A. in Philosophy), Perkins School of Theology of Southern Methodist University (Master of Theology), and Southern Methodist University (Ph.D. in Religious Studies).  His dissertation research was focused on Wesley Studies and the History of Biblical Interpretation.

He was ordained deacon in the Kansas East Annual Conference and elder in the North Texas Annual Conference. From 1986 to 1997 he served as pastor of three congregations in North Texas.  In 2003-2004 he served as interim pastor at Stonebridge UMC in McKinney, Texas. From 1997 to 2004 he served on the faculty of Perkins School of Theology, Southern Methodist University in Dallas, Texas. In 2004 he was elected a bishop by the South Central Jurisdictional Conference and assigned to serve as the resident bishop of the Kansas Area as of September 1, 2004. In 2012 the Nebraska Conference was added to his area and he led the creation of the Great Plains Conference which included the UMC congregations of both states. Beginning September 1, 2016, he serves as resident bishop of the Texas Annual Conference. He also serves as bishop of the United Methodist missions in Laos and Thailand.

He currently serves as chairperson of the denomination’s Committee on Faith and Order. He also serves on the Board of Trustees for Southern Methodist University, the Texas Methodist Foundation, and Houston Methodist Hospital.

Other books he has written include John Wesley’s Conception and Use of Scripture and Gathered Into One: The World Methodist Conference Speaks. He was co-author of Wesley and the Quadrilateral: Renewing the Conversation.

Bishop Scott is married to Mary Lou Reece, who is president of Reece Construction Company.  They have three children: Jameson, Arthur, and Marynell.