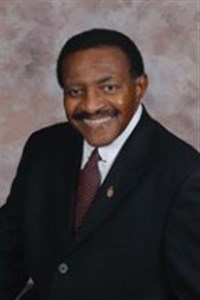 Bishop Woodie W. White is a Retired Bishop of The United Methodist Church, having served from 1984-2004.

A native of New York City, Woodie White graduated from DeWitt Clinton High School in New York. He attended Paine College in Augusta, Georgia. While attending Boston University School of Theology (S.T.B.) he served a pastorate in Worchester, Massachusetts. He then became a probationary member of the Detroit Annual Conference and was appointed as Associate Pastor and later, pastor, at East Grand Boulevard Methodist Church in Detroit. Subsequently, he began two years as Urban Missioner for the conference's work in Metropolitan Detroit.

With the establishment of a General Commission on Religion and Race by The United Methodist Church in 1968, Woodie W. White became its first General Secretary, serving in that capacity until 1984 when the North Central Jurisdictional Conference elected him to the episcopacy and he was assigned to the Illinois Area (1984-1992). Bishop White was assigned to the Indiana Area in 1992, and he retired there in 2004. He is now serving as Bishop-in-Residence at Candler School of Theology, Emory University.

Bishop White holds honorary doctoral degrees from Adrian College, Rust College, McKendree College, Illinois Wesleyan University, McMurry College and Evansville University. He holds numerous other honors, including a Distinguished Alumni Award from Boston University. He was on a four-person task force to examine racism and race relations in Australia and New Zealand for the Committee to Combat Racism of the World Council of Churches. He participated in preaching missions in Chile, Argentina, and Brazil. He has written extensively for denominational and ecumenical periodicals and is coauthor of Racial Transition in the Church, Confessions of a Prairie Pilgrim, and Conversations of the Heart.