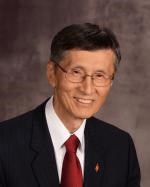 He was born in Onyang, South Korea, and graduated from Methodist Theological Seminary in Seoul, Korea, where he earned the Th.B. and Th.M. degrees He came to the United States in 1979 and earned M.Div. and D.Min. degrees from Wesley Theological Seminary in Washington, DC.  He was ordained in the East Annual Conference of the Korean Methodist Church in 1977 and transferred to the Virginia Conference in 1983.

He was senior pastor of Korean United Methodist Church of Greater Washington (KUMCGW) in McLean, for 22 years before being appointed superintendent of the Arlington District in 2005.

In his ministry as District Superintendent, Cho continued to focus on Christ’s vision for the Arlington District.  In seven years, under his leadership, the Arlington District started more than 10 new faith communities and introduced many training events for the clergy and laity to strengthen the spiritual foundation of ministry.

Young Jin Cho was elected to the episcopacy at the Southeastern Jurisdictional Conference in 2012. He is the first Korean-American elected to the episcopacy in the Southeastern Jurisdiction.  While it is uncommon for a newly-elected bishop to be returned to his or her home conference, Cho was assigned to come home to Virginia to lead the Virginia Conference for four years.

Cho has served the church and the community in various capacities, including president of the Korean Wesley Foundation, president of Partner’s Church Association for the renewal of the Korean United Methodist Church, Board of Ordained Ministry, Board of Discipleship and Commission on Ethnic Minority Local Church Concerns. He was elected delegate to the 2008 and 2012 General Conferences.

Kiok Chang and Young Jin Cho were married on May 19, 1975 in Seoul, Korea. The Chos have two daughters, Grace and Sophia, one son, Chris and one grandson, Luke.