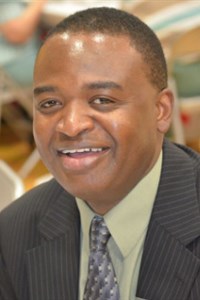 The Rev. Dr. Maidstone Mulenga  currently serves as the Director of Communications for the Council of Bishops of The United Methodist Church. He previously served in the dual role as the Assistant to the Bishop and Director of Connectional Ministries in the Baltimore-Washington Conference.

In that role, Rev. Mulenga was the steward of the vision of the BWC, where he provided leadership to 34 distinct ministry and mission teams. He also oversaw the resourcing of the conference’s 640 churches, four campus ministries, and three camping and retreat facilities. An avid believer in the power of the global church, Rev. Mulenga also fostered the conference’s partnerships in Zimbabwe, Eurasia, South Korea and Puerto Rico.

Before answering a call to ordained ministry, Rev. Mulenga worked at several newspapers in Michigan and New York as editor of various departments and at various levels, including as Managing Editor.

He has served as delegate to the General and NEJ Conferences and is the editor of the Northeastern Jurisdiction Conference Daily Christian Advocate. At the 2016 and 2019 General Conferences, Rev. Mulenga served as secretary of the Committee on Correlation and Editorial Revision, the committee that edits the Book of Discipline.

Rev. Mulenga serves as director of the United Methodist Publishing House in Nashville. He previously served on boards of the Jane Bancroft Robinson Foundation in Washington, D.C.; the Board of Child Care in Baltimore, the Asbury Communities Board in Gaithersburg; and the Mid-Atlantic United Methodist Foundation in Lancaster, PA.

He holds a doctorate and graduate degrees in divinity, computer-mediated communication and journalism from colleges in Zambia, Michigan and New York states.  He is a published author in several books and publications including his own, To Our Readers: A Study of Guilt Redemption in Newspaper Corrections.

He is married to Charity and they have two daughters, Lukonde and Mukuka who are graduates of the University of Michigan and Penn State University respectively.